Symmetry is beauty in itself 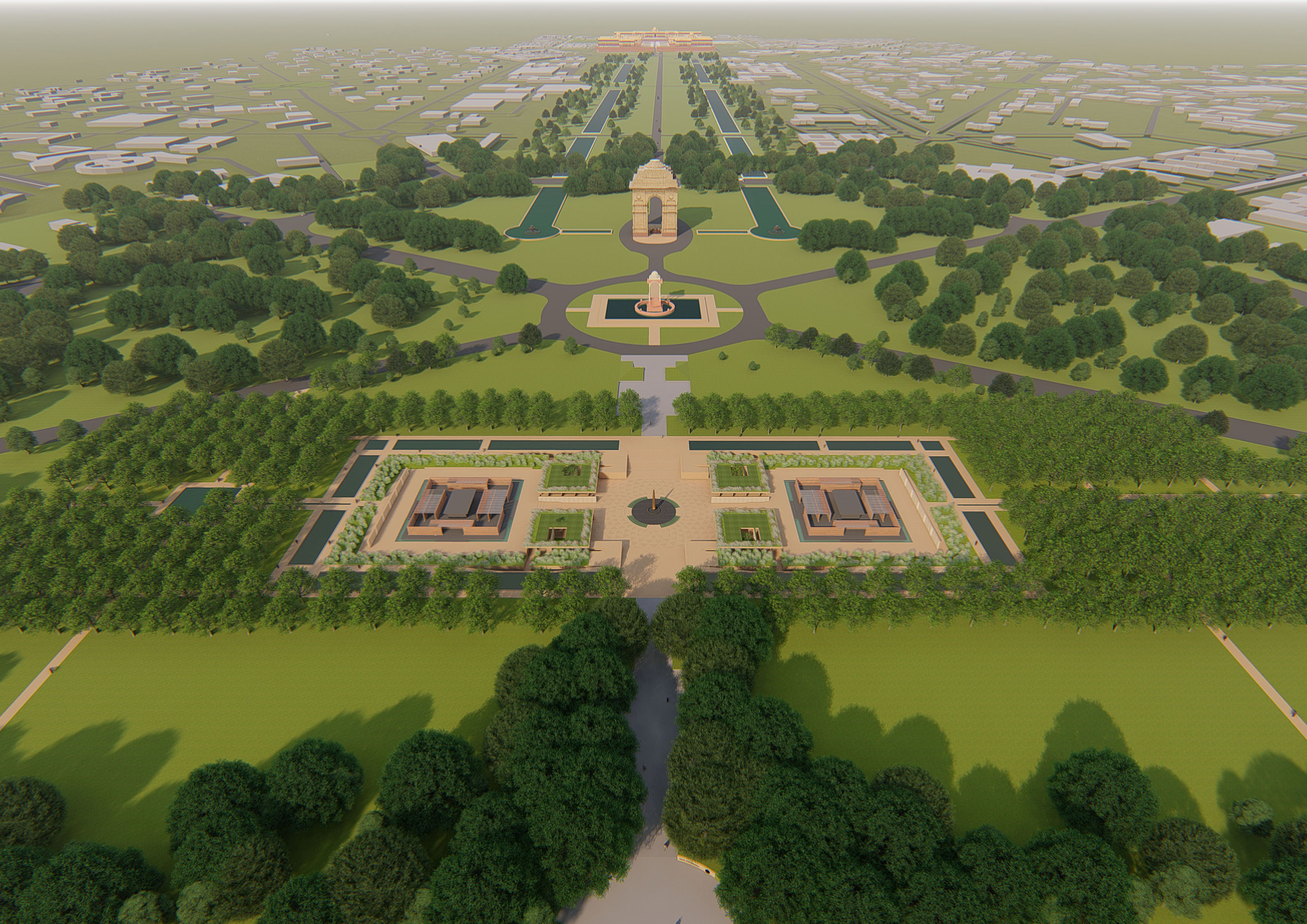 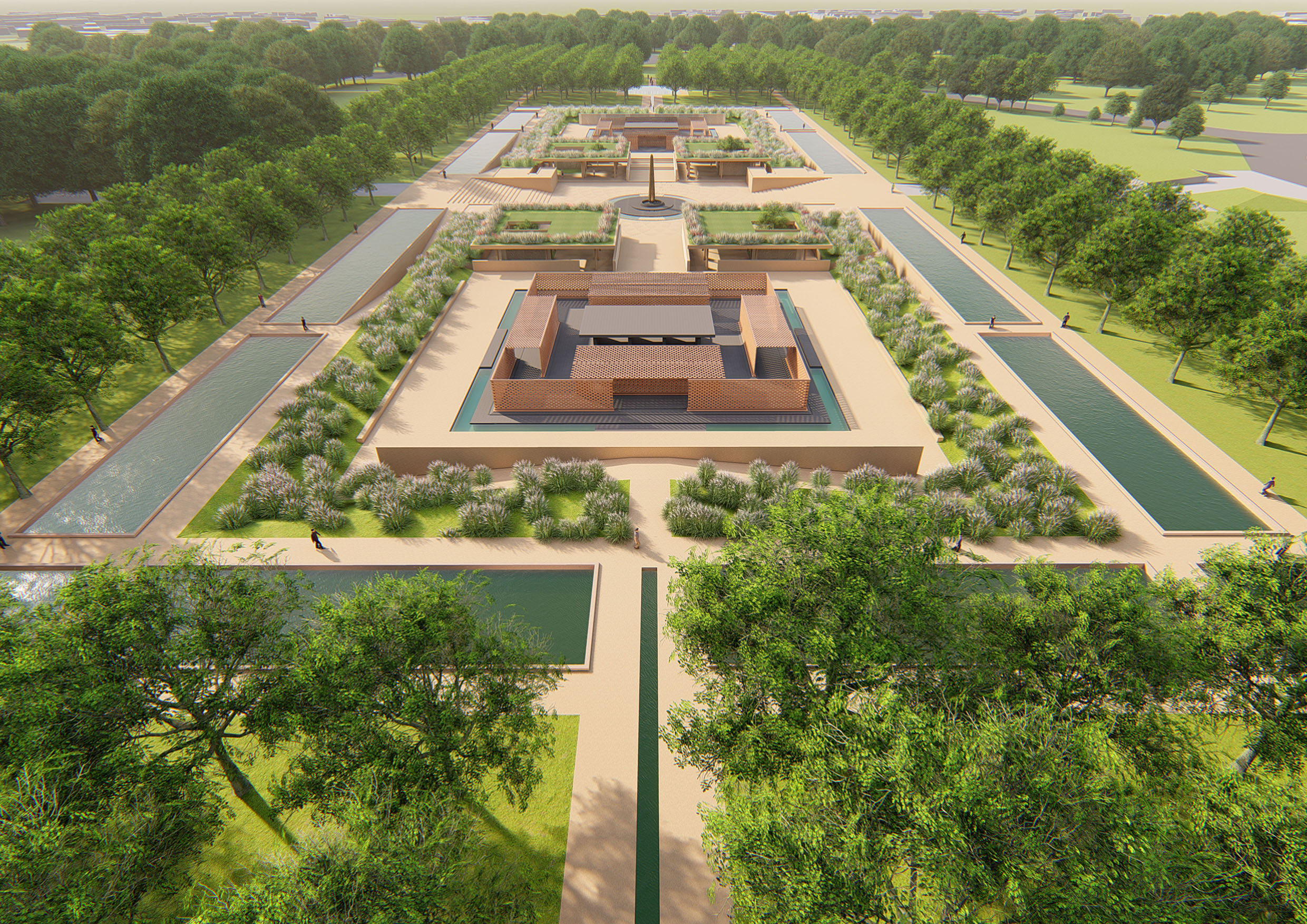 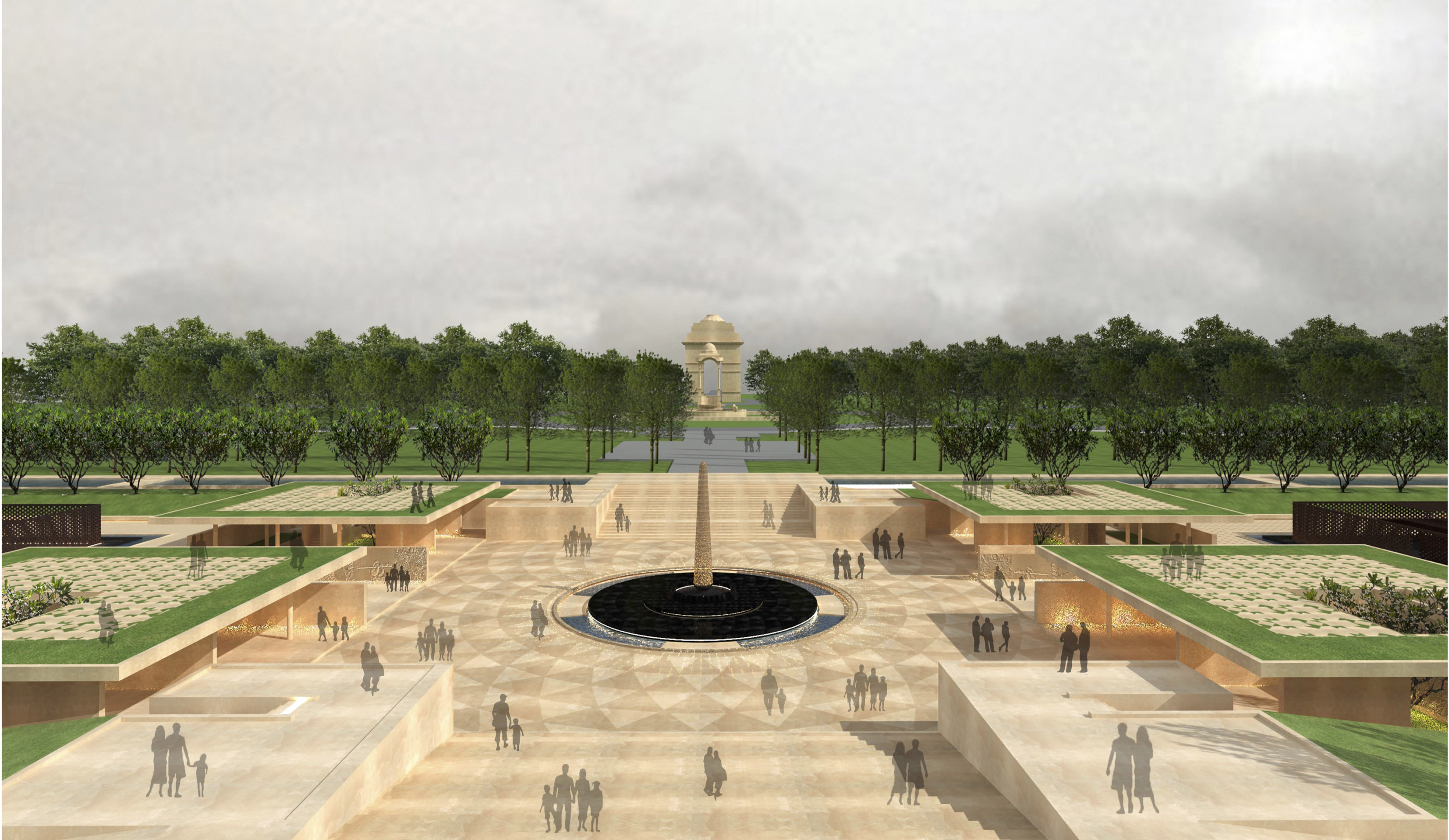 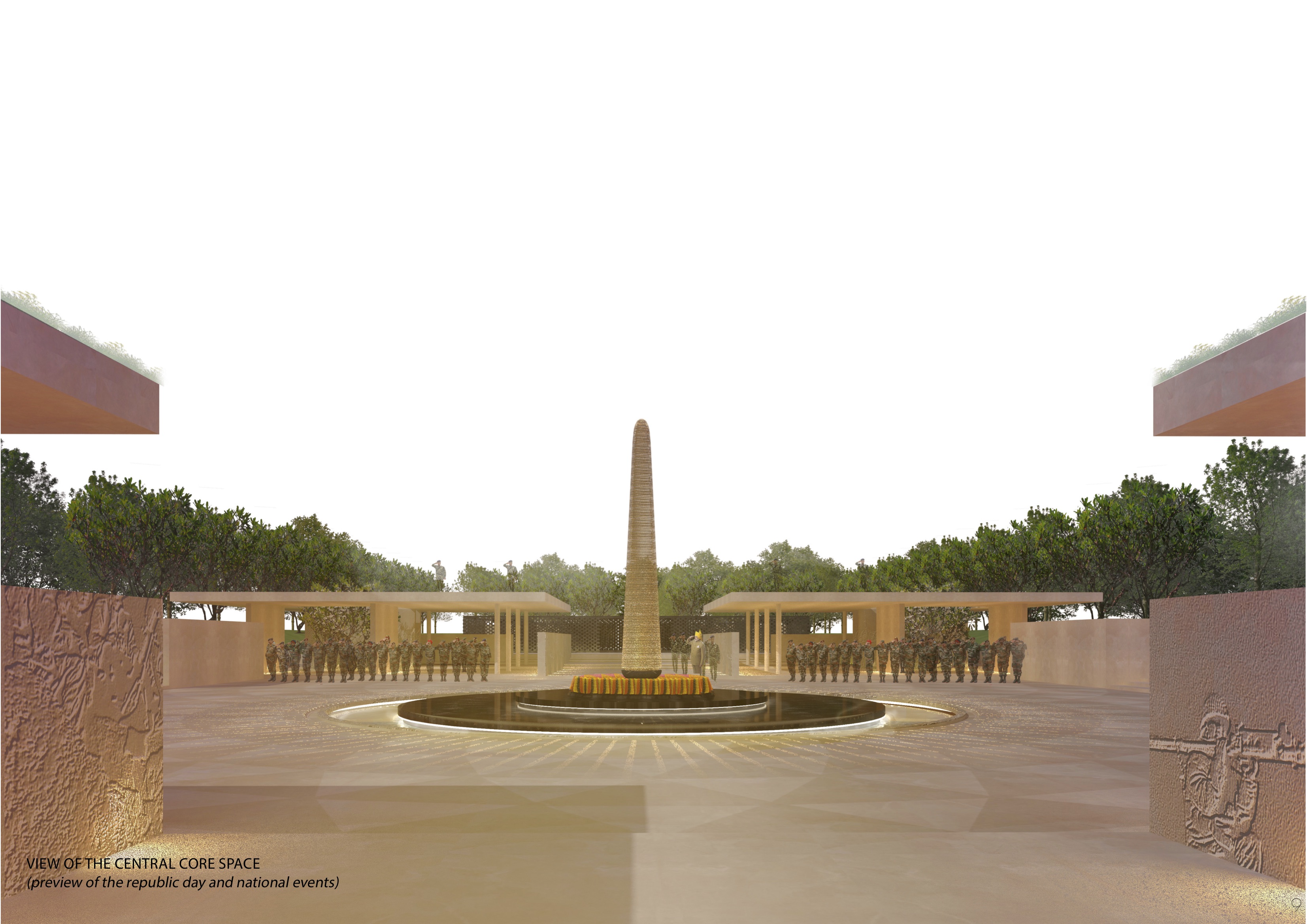 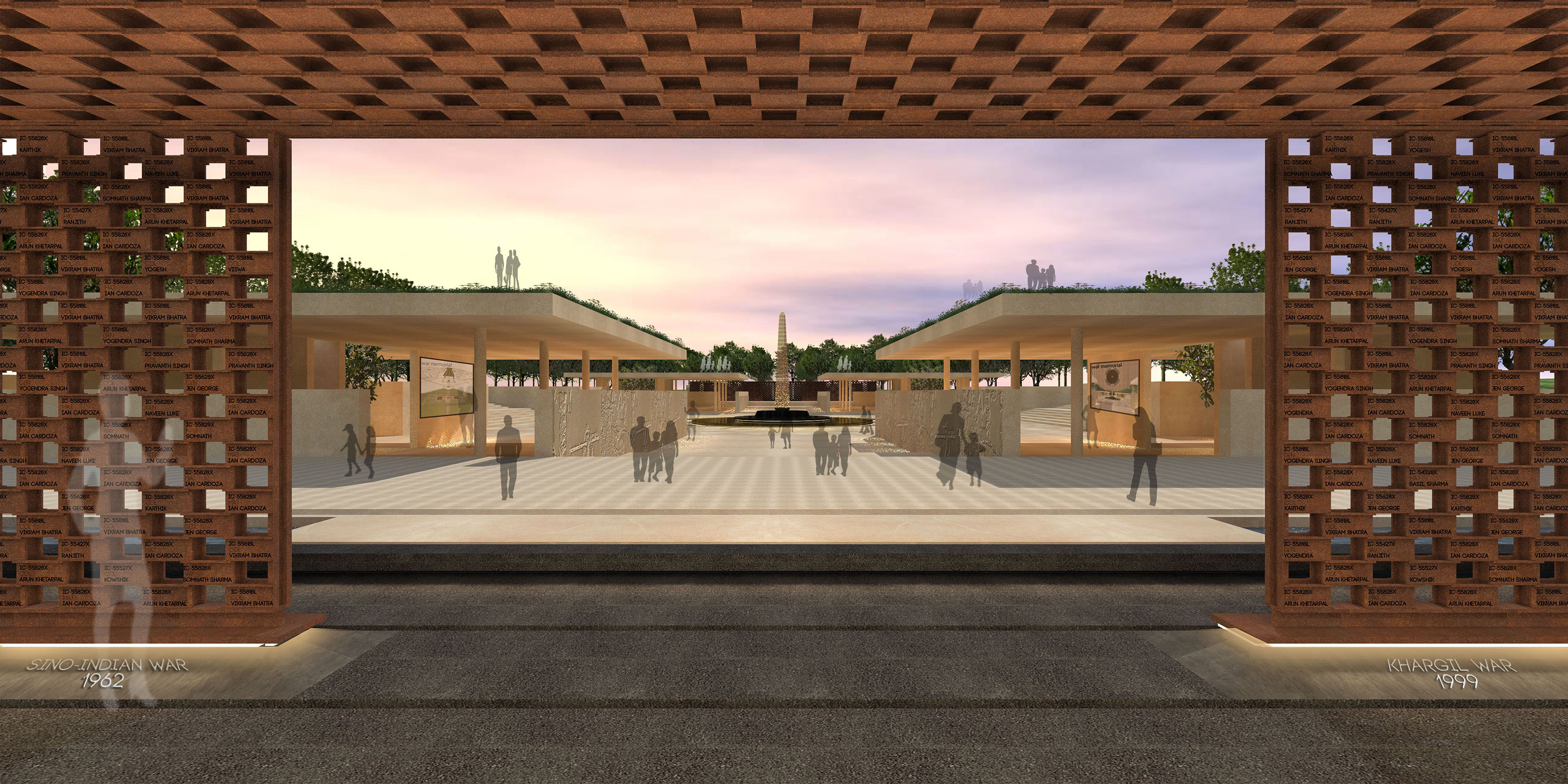 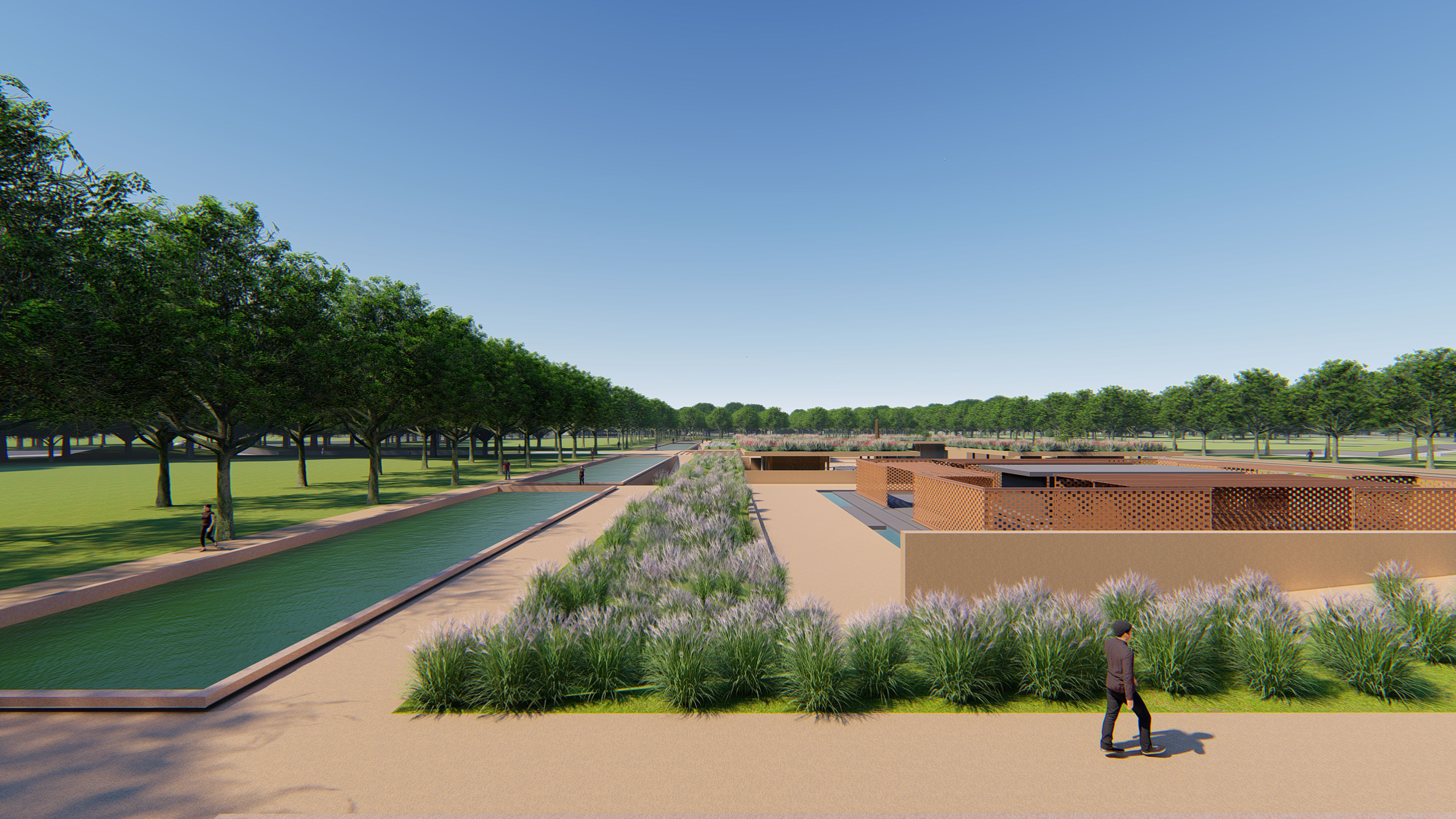 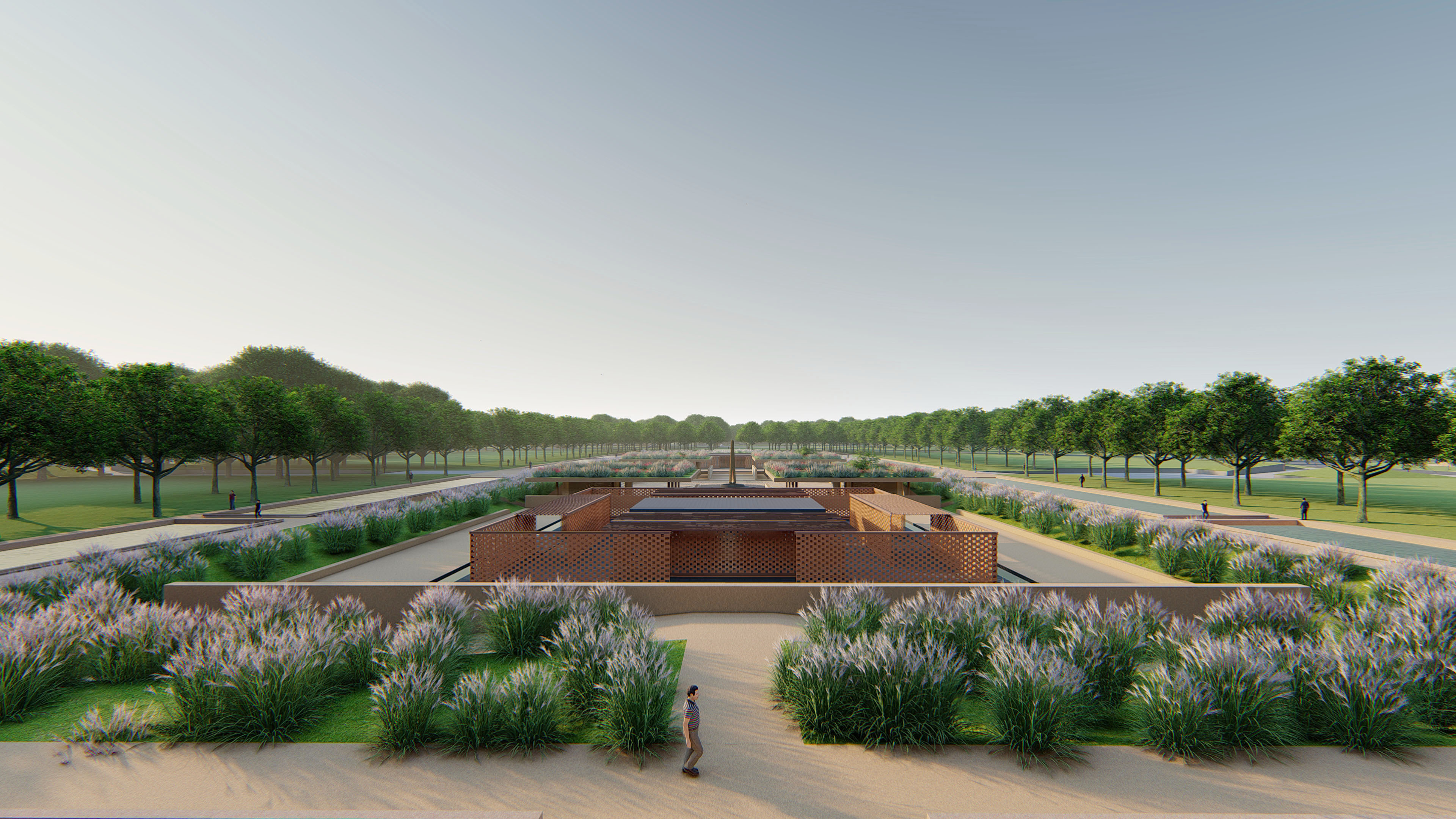 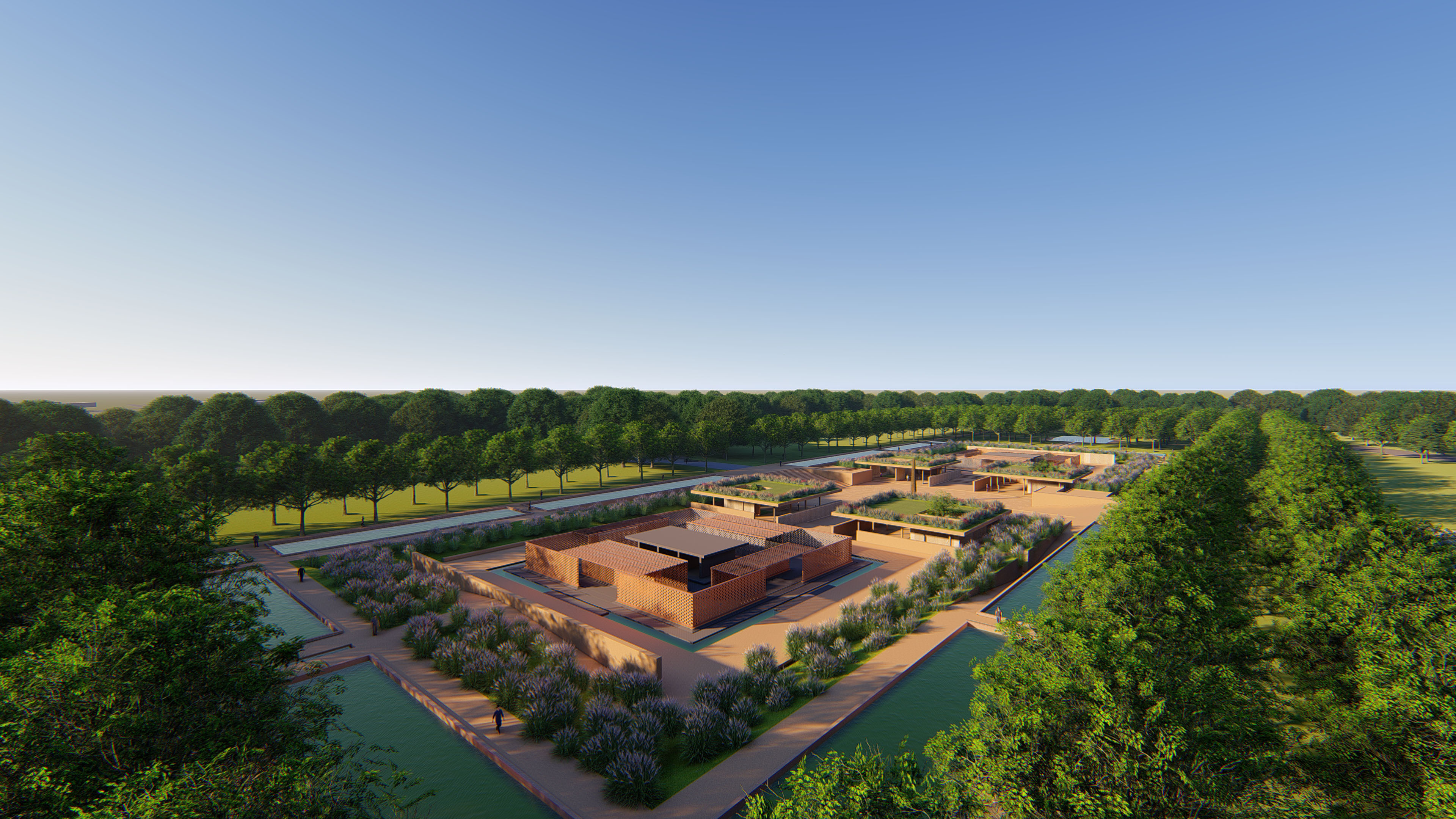 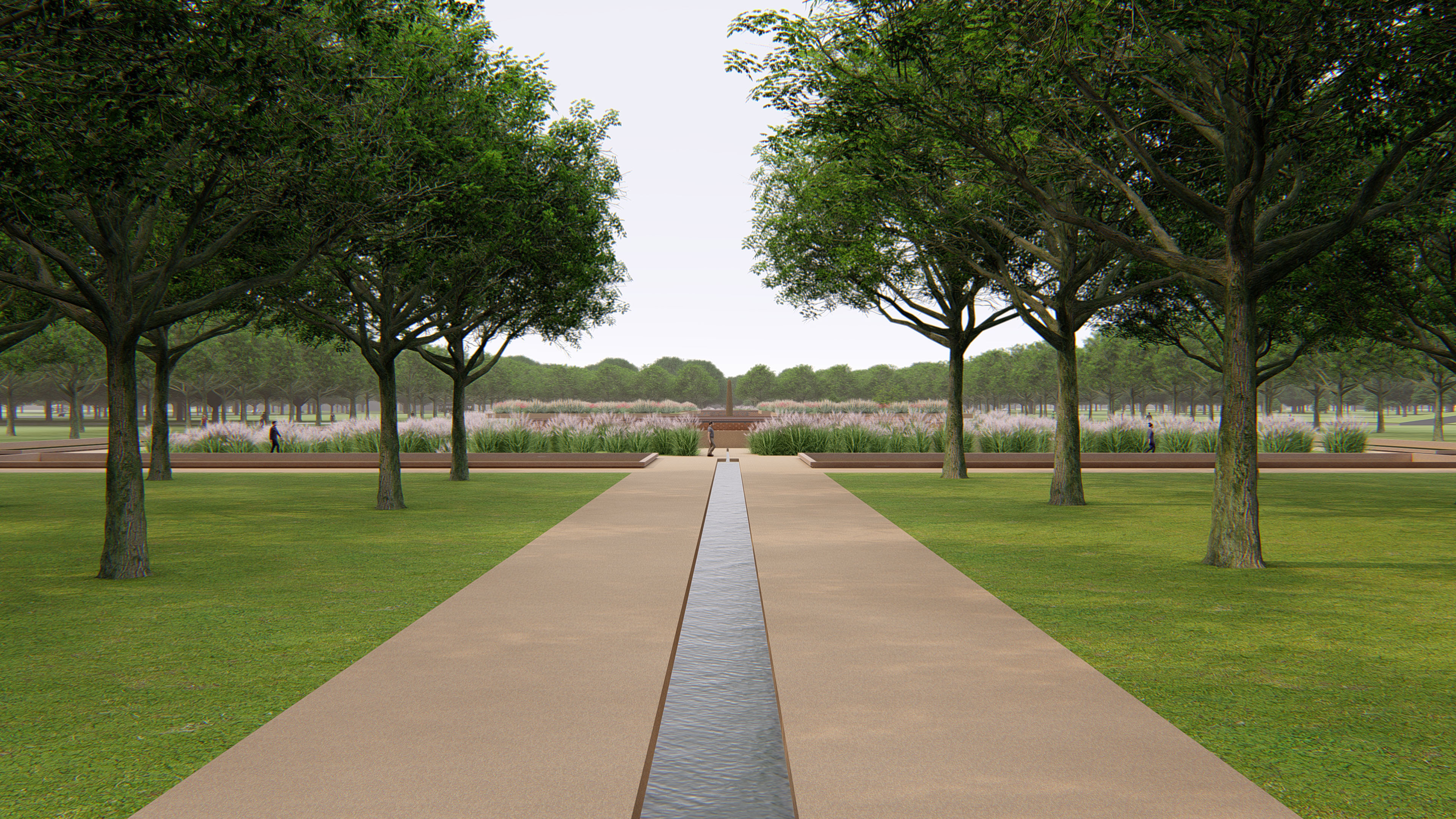 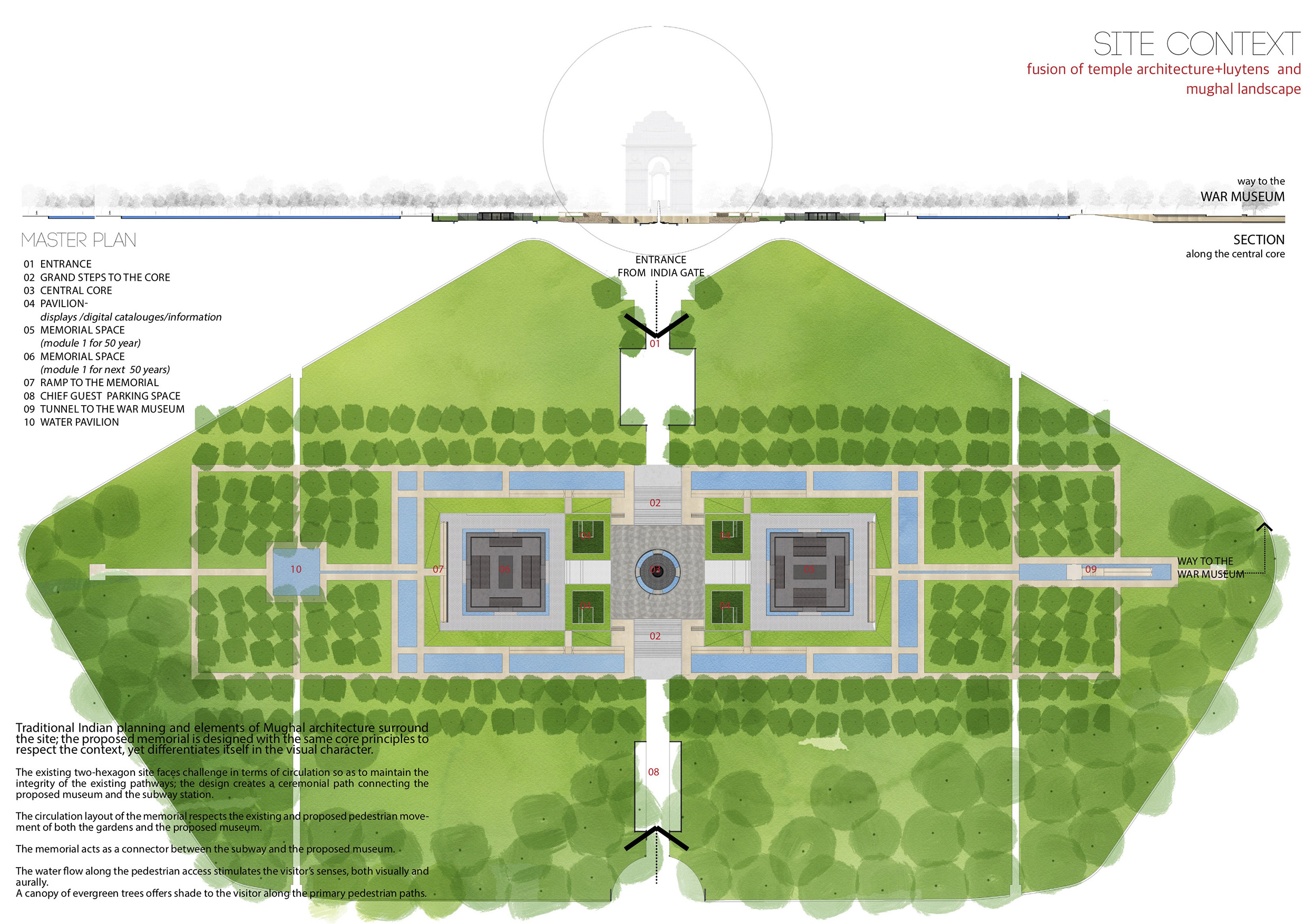 Traditional Indian planning and elements of Mughal architecture surround the site; the proposed memorial is designed with the same core principles to respect the context, yet differentiates itself in the visual character.

Symmetry is beauty in itself.

The key component of the design are the visual identity and the visual connection to the India Gate creates a new memory with an old reference. Multiple terraces act as places where the powerful image can be viewed.

The central core could be accessed by two sets of Grand staircases which ascend towards the central monument - the pinnacle of glory.  While a ramp in the form of a tunnel connects the central core from the war museum. The simplicity of the design can be seen in the materials usage. Three major materials are used in the design of the memorial - Wrought Iron, sandstone and black granite but the bountiful of natural elements like trees and water create a unique experience for the visitor.

The central core is an intricately designed element of the memorial. The base pedestal is made of black granite and the pinnacle of glory rises from the strong base. The pillar is an installation consisting of numerous bullets depicting a moment frozen from the 21-gun salute for the Martyrs. This central core is surrounded by a flooring pattern inspired by the chakra.

Wrought iron symbolizes the spirit of a soldier- Pure, Tough and malleable

Simple in form; versatile in character

The design captures the materials strength and stability through its apertures and solidarity.

The memorial is placed on a raised black podium. walls arise from the base acting as an index for the wars showing the relevance of the martyrs in the respective war. Every martyrs name is engraved on a single wrought iron brick, so families can pay their tribute to them and the visitors can understand the scale and sacrifice of the martyrs.The pedestal also limits the access to the walls protecting the integrity of the martyrs.

The visitor, inside the core of the memorial, gets to feel the Pride that every soldier feels while reminiscing the achievements of the Army and the Pride with which he Sacrifices his life for his Country.The wrought iron jalli, displays a myriad of chiaroscuro patterns through sunlight creating an illusion of the soldier’s rhythmic movement in a battle formation.

A sacred entry is created for visitors to access the memorial from the museum through a tunnel. The space is surreal with the sound of the water above and the visual connection to the memorial. With images of the battle etched along the tunnel, a unique experience is created before the visitor enters the museum.

The entrance pathways are flanked with avenue trees. The foliage of these trees start from above eye level and therefore has better visual connect with the surrounding.Landscape forms an integral part of the design. A land form is created descending towards the water canal and tall trees with high grass are planted along the edge to create a serene environment. The berm and trees helps in reducing the noise and creating a quiet environment for families of martyrs.

The avenue of trees establishes the connection back to India gate and create a human scale walking space providing shade for visitors.